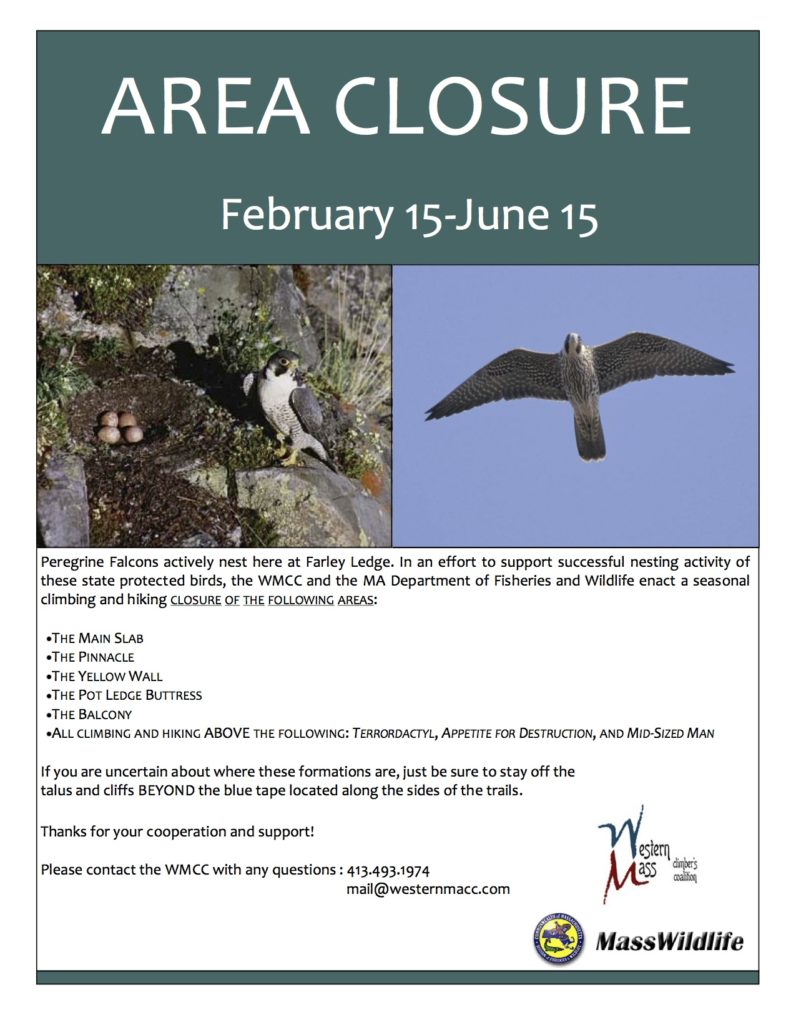 Each year, a portion of cliff at Farley Ledge is temporarily closed due to peregrine falcon activity.  In an effort to support successful nesting of these state protected birds, the WMCC in cooperation with the MA Department of Fisheries and Wildlife enacts a seasonal closure for climbing and hiking.  Historically, prior to any formal investigation on the bird’s nesting patterns, the WMCC would enact a complete closure of the cliffs each season.  However after careful research and inspection conducted by the Mass F&W with assitance from the WMCC, the restricted area and season was refined to better represent the falcon’s needs by providing a substantial buffer zone while also allowing for recreational use.  Over the years, the falcons have continued to return and have reportedly been successfully reproducing!  The hard work  and partnership between the WMCC and Mass F&W is a demonstration of a positive and constructive working relationship to preserve sensitive cliff habitats while maintaining recreational access.

Closure details:  Feb 15 – June 15.  Signs have been posted throughout Farley.  This closure includes climbing on cliffs (from left to right): The Main Slab, The Pinnacle, the Yellow Wall and The Balcony, Pot Ledge Buttress, and Lover’s Leap.  In addition, all bouldering and roped climbing ABOVE the following boulder problems are closed: Terrordactyl, Tweaky Bird, Appetite for Destruction, and Mid-Sized Man. The boulder problems near Stereogram and Babies as well as the area known as The Four Tiers are OPEN.  If you are uncertain about where these formations are, just be sure to stay off the trails, talus and cliffs ABOVE the flagging tape and signs.

WMCC ANNOUNCES NEW PRESIDENT!Notes from the 2016 3rd-Quarterly Meeting of the Board
Scroll to top